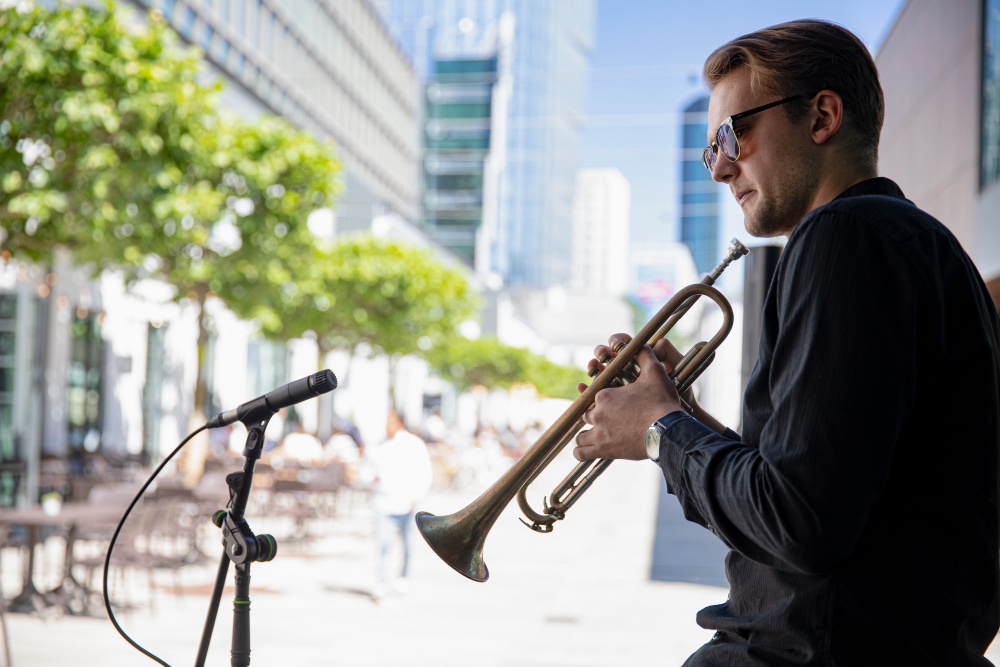 New restaurants and the summer face of the Norblin Factory

The multifunctional Norblin Factory complex in Warsaw’s Wola district, which belongs to the Capital Park Group, is expanding its food offer by adding more restaurants. The total area dedicated to culinary delights already spans more than 10 thousand square metres and will eventually include as many as 37 establishments. Additionally, in the spring and summer season, the Norblin Factory has been filled with gardens which offer almost 500 seats to the complex’s guests. A summer music stage has also been launched, which will host over 100 concerts until mid-September.

The food offer of the Norblin Factory has been expanded with new restaurants. The new tenants of the complex include the Bocca Ristorante & Pizzeria with Italian cuisine and Neapolitan pizza made according to traditional recipes, and SOUL on the Grill serving American comfort food, including burgers, ribs and steaks straight from the grill. The Paradiso restaurant with international cuisine opened at the beginning of June, while the legendary Warsaw Tex-Mex restaurant Blue Cactus will launch in one of the historical buildings in a few days. In the coming weeks, the offer will additionally include Dary Natury – Pijalnia Ziół and the ice cream parlour Good Lood. Including the new concepts, the total area dedicated to food delights across the complex will amount to over 10,000 sq.m., making it the largest space of this kind in Poland.

Everyone will find something to their taste at the Norblin Factory. A total of 37 food concepts will be available. 31 are already in operation, another two will be added in June, and the remaining four, which have already signed leases, will open in the third and fourth quarter of 2022. The Food Town, which is Warsaw’s largest food hall located in five historic halls (3,500 sq.m.), houses as many as 24 food concepts offering a variety of cuisines from around the world. There are also four theme bars with a 50-strong bartending team led by cocktail art director Adam Grądziel and bar manager Tomasz Małek, winner of 66 bartending competitions around the world, four-time Roadhouse World Final Champion and four-time winner of the WFA Grand Slam international flair league. In addition to excellent drinks, the Piano Bar serves tapas, salads, main courses, and lunches every day from Tuesday to Friday. The historic annex of Franciszek Ryx’s villa houses the only Wiśniewski outlet in Warsaw with its own liquors as well as the multitap bar with craft beer UWAGA Piwo. The BioBazar Bistro welcomes fans of seasonal cuisine and offers breakfasts and lunches based on fresh products straight from the stands at the organic market, created under the supervision of chef Michał Toczyłowski.

Given the current garden season, almost 500 additional places are available to guests of the bars and restaurants located in the historical buildings of the complex. The Norblin Factory Summer Stage has launched. Every weekend until mid-September, the streets of the Norblin Factory will resound with live music performed by artists representing a wide variety of musical genres. This is a new initiative of the Norblin Factory Foundation which works to support young talents. In total, over 100 concerts will be held as part of the “Make Music Not War” cycle. The performers include winners of competitions who have given many live shows and participated in music TV programmes, such as The Voice of Poland, as well as graduates of the best Polish music academies, including the Fryderyk Chopin University of Music and the Academy of Music in Katowice.

The Norblin Factory is a multifunctional complex in the heart of Warsaw’s Wola district. After a long-term revitalisation of the former Norblin, Buch Brothers and T. Werner factories completed by the Capital Park Group, it has reopened for the city with its enchanting historical buildings blended with modern architecture. Visitors to the Norblin Factory enjoy culture, entertainment and food concepts, including the original boutique cinema KinoGram, the organic food market BioBazar, the largest food hall in the capital city Food Town, the Piano Bar with live music in one of the oldest buildings of the complex, the Norblin Factory Museum which commemorates the 200-year history of the location, as well as shops and retail and service outlets. The complex houses Yes and W.Kruk jewellery stores, the L’Erbolario drugstore with Italian cosmetics, a Super-Pharm drugstore, a Medicover Stomatologia dental care facility, a Paris Optique and a Sirene Eyewear optical salons soon to be joined by Medicover Optyk. Other outlets available on site include the Lifestyle Designers Boutique offering stationery and business accessories, a store of the Danish audio brand Bang & Olufsen, the Buqiet flower shop, and the M&P spirits salon with a wide range of alcoholic beverages.