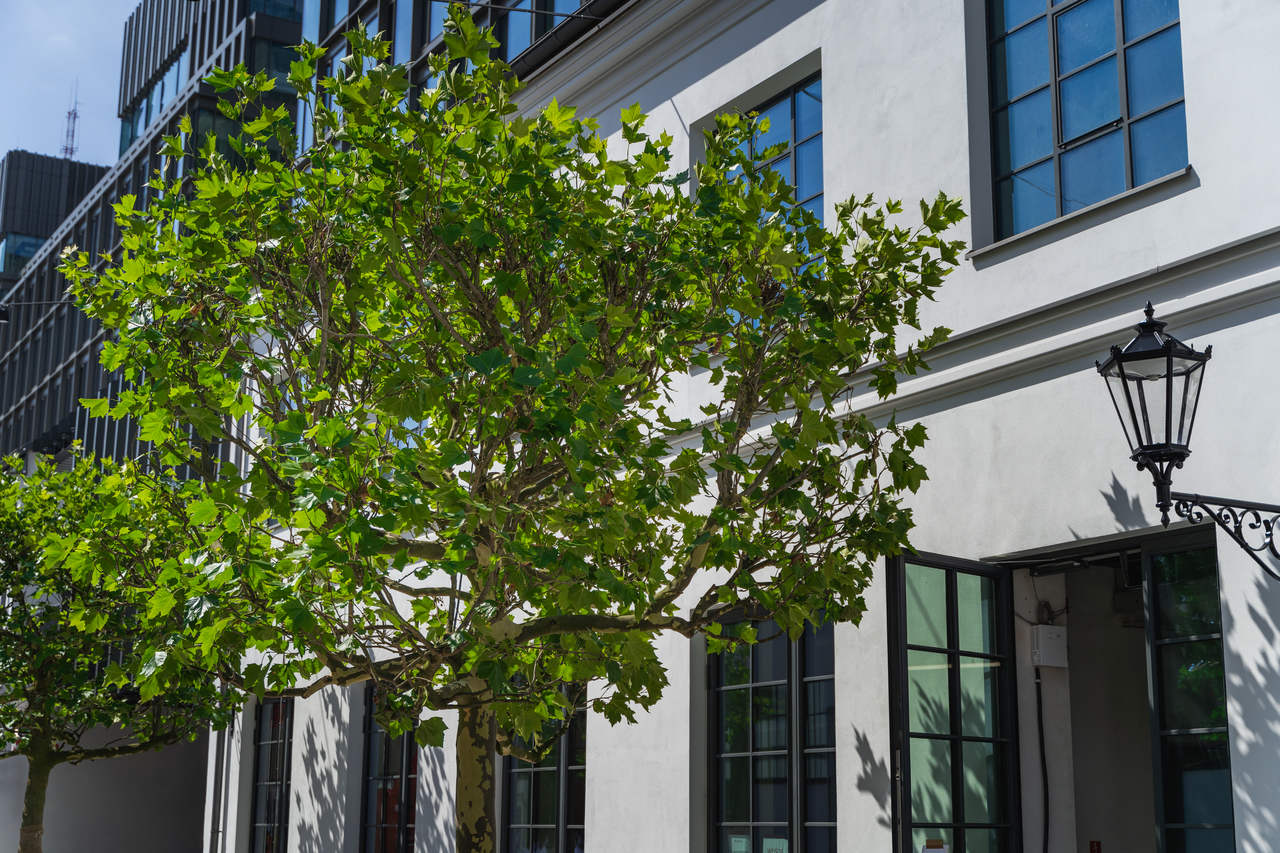 Norblin Factory is getting greener

Plants have appeared in the historic streets, passages, on walls and terraces of the Norblin Factory. A total of 106 trees and numerous climbers, perennials and ornamental plants have found their place here, changing their appearance and colors depending on the season.

Works related to green architecture at the Norblin Factory have been completed. There are 22 trees in the historic, accessible to all parts of the complex. Due to the complicated technology, as well as their large size, trees in the passages were planted in the evening and night hours, two pieces each. Already at the stage of construction works, a place has been planned for them – they grow in a system of special pots, placed in the ceiling of the underground car park. In the streets of the complex, there are 13magnificent plane trees and 3 high-growing hornbeams – trees famous for their longevity and resistance to various weather conditions. They come from Bruns Pflanzen –one of the largest plant nurseries in Europe, the traditions of which date back to 1876, located in the German region of Ammerland on Lake Zwischenahn (Zwischenahner Meer). The trees are about 15 years old and between 4 and 10 meters tall. The four highest of them (8-10 m) are kept in a stalk form, which means that their crown is not regulated. The remaining 9, slightly lower specimens (4-5 m) have their crown adapted to the so-called candelabrum forms.

Three impressive high-growing hornbeams found their place in the glazed, roofed inner passage named after Teodor Werner, running between Prosta and Łucka streets. Another six 4-meter high specimens of this species were planted by the building on the corner of Łucka and Żelazna streets. Between them there is an additional arrangement of perennials, flowers and shrubs, including torsion dogwood, Tiarella wherryi and cherry laurel.

The new upward extension with office buildings has also grown in greenery – plantings have been made on two patios, terraces on the last levels (8th floor), as well as on cascading terraces from the side of Łucka Street. In these spaces, various compositions of shrubs and creepers have been created, such as dwarf mountain pine, snowberry, leatherleaf viburnum, sedge in two varieties, cherry laurel, panicled hydrangea, rhododendron, ferns, mock oranges, astilbe, hyssops or hepatica. Among them, as many as 84 trees known from the native yard, as well as the more exotic ones – Himalayan birch, winter-flowering cherry, yellow groove bamboo, Japanese white pine, wild cherry, and juneberry – were planted. In addition, the roofs of both office buildings have been made greener by placing there extensive vegatation, resistant to drying, blowing or sun exposure. The implementation of the greenery is part of the Capital Park Group’s activities in the BREEAM ecological certification process for the Norblin Factory.

– The arrangement of vegetation was one of our priority tasks. Due to the factory-related character of the area, there was no biologically active area throughout the entire complex. The green architecture, especially in the historic part of the complex, was also subject to conservation guidelines. Our goal was to reconcile these two factors—prevent the area from becoming a concrete desert, but also not to obscure the unique beauty of post-industrial architecture. Ecology is inscribed in the DNA of our company, so trees, which are the best filters for urban smog, could not be missing here. We consider the fact of planting more than a hundred trees in such an area a huge success – says Kinga Nowakowska, operational director and member of the management board of Capital Park Group, responsible for the revitalization of the Norblin Factory. – Their number will continue to increase on terraces rented to tenants. Most of them are adapted to the installation of greenery, both in terms of construction and technology. We also plan to decorate entrance halls to offices and commercial and service passages with vegetation – Nowakowska adds.

Walls of office buildings, patios, as well as entrances to the complex will also be decorated with vines, including common ivy, crimson glory vine or Dutchman’s pipe, known for its characteristic, decorative heart-shaped leaves. They are planted in special pots placed in the ground and will climb on a system of special fasteners and metal ropes dedicated to this type of solutions.

RS Architektura Krajobrazu, specialyzing in greenery integrated with architecture and having extensive experience in its design, is the studio responsible for the concept of landscape architecture. The effects of their works can be admired in Warsaw, among others on the Vistula Boulevards or Świętokrzyska Street. AKG Architektura Krajobrazu, with over 20 years of experience in the implementation of large investments related to the development of public areas, housing estates and office complexes, is responsible for the implementation of the project and planting vegetation on site.